A Beginner’s Guide to Scaling an Awareness Campaign 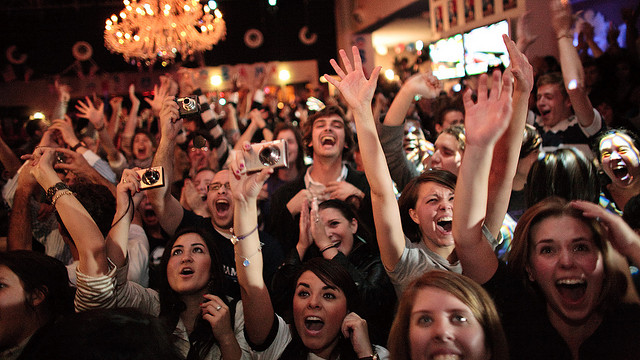 Every once in a while you start seeing the same symbol or logo all over the place. Maybe it’s a sticker you keep seeing on cars, or an image people are using for their profile picture on social media, or maybe it’s just a t-shirt. Sooner or later, you have to ask: “what’s this about?”

Often you will stumble upon a cause or organization that is blowing up in popularity. And the more people who find out about it, the more people spread it. It’s like the cause has gone viral. But how?

Wondering what makes a particular nonprofit organization go from unknown to the next big thing, I researched the success of some organizations that have gained immense popularity in recent years. And among viral organizations like the Human Rights Campaign, Movember, and To Write Love on Her Arms, there were some recurring themes. Reading this blog isn’t guaranteed to make your cause a global movement, but thinking about these shared qualities may help you build brand awareness and gain new donors and fundraisers.

It may sound counterintuitive, but gaining widespread awareness might begin with narrowing down your audience. Many of the nonprofits experiencing huge growth appeal to a specific group of people, a specific persona. This might be what allows people to connect with the brand enough to internalize and advocate for it.

Here are a few successful organizations and the main audience they appeal to:

Appealing to a specific age group, interest, or community makes it easier for people to feel a personal connection. It makes an organization stand out among the more than 1 million nonprofits trying to spread their message.

There is often a large emphasis on awareness and community, which may not always translate into dollars. Adam Garone, founder of Movember said at the 2012 SXSW Festival that 40% of their supporters don’t actually raise any money for the cause. “And we’re absolutely fine with that because for us it’s about getting men engaged and having that conversation.”

If your cause starts to gain popularity, there will probably be people who support the idea but don’t want to be a devoted fundraiser. But that passive participant might talk about your organization to someone who wants to donate or get involved.
Reaching Out

Once a nonprofit knows its audience, they need to get in touch with them. The popular nonprofits I researched did this by going where their audience was already hanging out, whether that was online or in person. The Trevor Project began in 1998 as a 24 hour suicide hotline for LGBTQ teens. The goal was to provide support for kids and young adults who may not have those resources in their community. These days the internet and social media are where many people turn to find resources when they don’t have access to it. The Trevor Project responded by creating TrevorChat and “Ask Trevor,” online platforms for young people to ask questions and talk with each other.

Other nonprofits recruit a lot of fundraisers through face-to-face interactions. Liberty in North Korea is driven largely by young people who want to make a difference. To reach this audience, LiNK sends representatives to high schools and colleges all over the country. Local chapters are often affiliated with schools and have a built-in community and place to meet.

To Write Love on Her Arms gained attention in part by growing its presence on Myspace. This nonprofit works to support and help people struggling with addiction, depression, self-harm, and suicide, topics which became prevalent in a number of rock genres in the 2000s. This music scene also remained active on Myspace, where TWLOHA emerged. To reach their audience, the organization remained active on the network and began campaigning at music festivals.

Like many of the nonprofits that seem to go viral, TWLOHA spread its message by focusing its outreach efforts on the spaces where their audience was already present. That is why it is important for organizations to be conscious of how their donors and fundraisers communicate. You have limited time and resources, so invest them in social networks and events that attract your donor personas.

In the beginning of this blog post, I talked about one of the most interesting tools popular nonprofits tend to use, the visual indicator. Supporters of the cause display some type of marker on their car, clothes, or social media accounts. Like I said, this visual cue will be noticed as more people adopt it and curious onlookers will ask about it.

The Human Rights Campaign often leaves its mark on the bumpers of cars. At events and rallies, HRC gives away their signature equal sign sticker. Perhaps what gets so many people to take it and use it is its minimal design. The symbol draws the eye with contrasting colors, but its small size and lack of text doesn’t seem as loud or obnoxious as some other bumper stickers.

To Write Love on Her Arms’ visual cue is its tee-shirts and sweatshirts, which are usually black with the name of the organization in a simple font.

Supporters of the Movember Foundation demonstrate show their support on their face. The organization was born from a discussion on how moustaches had fallen out of fashion. Now, when men grow moustaches in November, the change in their appearance causes friends, family, and coworkers to ask why they did it.

What all these visual signs of support share is that they create curiosity in the public. It’s actually a clever form of permission marketing because it promotes the brand by making people want to know more. Rather than knocking on your door on a Saturday morning or inundating you with paid advertising, these nonprofits create a knowledge gap. Because no one wants to be left out of the next big thing, people seek more information. Take a moment to consider whether your nonprofit has any visual presence outside of your office. Is your brand starting conversations?

One Way to Scale Up

Targeting your key audience in the places they frequent can be a great way to promote your brand and increase awareness. And many of these nonprofits seem to have fun while doing it. It’s important to note, however, that this route isn’t for everyone. This model of marketing requires you to give up some control to your supporters. These movements succeed because their advocates identify with the cause and make it their own. Back in 2012, Adam Garone said, “We effectively hand over our brand to those ambassadors.” That requires a lot of trust in your supporters. [Read about creating an unbreakable circle of trust with fundraisers, here.]

One parting caveat: Rapid growth can also draw a lot of scrutiny to your organization, especially when you are emphasizing awareness. Nonprofits like Livestrong and The Susan G. Komen Foundation have been criticized for not living up to their popularity and image. It doesn’t mean an organization can’t recover or handle PR when thrust into the spotlight, but if your organization is embarking on an attempted scale, make sure you are prepared to respond, be transparent, and live up to your projected image.

It is best to consider if the methods used by these organizations make sense for your cause and your community. Fortunately, you can adapt any of these elements to fit your budget and mission.

A Beginner's Guide to Scaling an Awareness Campaign

A Beginner's Guide to Scaling an Awareness Campaign