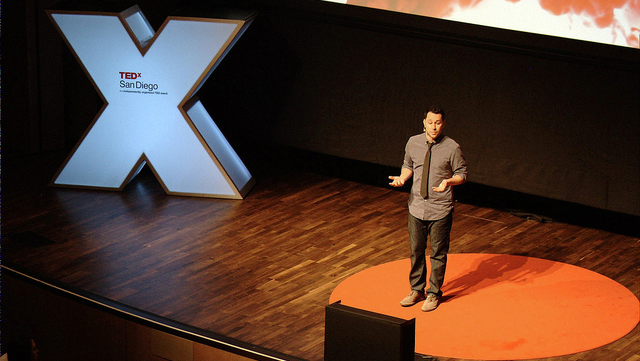 At the beginning of December several members of the Classy staff had the pleasure of attending TEDxSanDiego’s 2012 event “Cause & Affect.” Hosted at the gorgeous Irwin Jacobs Qualcomm Hall, the venue was packed to the brim with six hundred inspired and energized attendees. It was truly an incredible event. But what made the day especially memorable was that our own co-founder Scot Chisholm was one of the speakers.

Scot’s speech explored events in his own life. From his mother battling breast cancer when he was growing up, all the way to his role as a co-Founder of Classy. Scot’s story is one that a lot of young adults can probably relate to. After seeing his mother struggle through two bouts with breast cancer, Scot was moved to do something. But for years he didn’t. Like a lot of us, his good intentions remained just that, intentions.

At the age of 22, after moving out to San Diego, Scot finally took his first step into social action by helping create (of all things) the first ever Stay Classy pub-crawl to raise money for the American Cancer Society. That initial foray into philanthropy led to another, and then another.

Ultimately Scot extends his own experiences to argue that any average person can become an “empowered citizen” by working social action into their lives. He argues that while the impulse to apathy is common, in today’s day and age of rapidly expanding technology, the barrier to getting involved has never been lower.

“Today it’s less about how to get involved, and more a personal decision of whether you want to or not”

Check out Scot’s video above and some of our other favorites from Cause & Affect:

The Guide to a Modern Nonprofit