Organizations have raised more than $4 billion online with Classy. Learn how.

3 Fun and Unconventional Fundraising Ideas to Spark Your Creativity

At Classy, we’re lucky to have a front row seat to some of the most fun, unique, and out-of-the-box fundraising ideas in the nonprofit sector. And because creativity begets creativity, we thought it would only be appropriate to share these innovative campaigns with you!

Here are 3 creative nonprofit fundraising ideas that were particularly out-of-the-box, along with firsthand insight into their communication and marketing strategies. We’ve also included takeaways for each one, so you use these engagement tactics to boost your next campaign’s results.

Blood:Water partners with African grassroots organizations to address the HIV/AIDS and water crises. Through technical, financial, and organizational support, they have provided clean water and HIV/AIDS support services to nearly one million people in eleven different countries. In a creative effort to engage supporters, their recent 24-hour donation campaign used the combined powers of pop culture, humor, and bathroom puns to raise money to build latrines throughout Africa.

The theme of their campaign? “The Real Game of Thrones.”

A nod to the popular television series about royal battles and power struggles, “The Real Game of Thrones” brought attention to the actual battle in Africa for proper sanitation and latrines, or “thrones.” The campaign aimed to raise enough money in 24 hours to build 21 latrines in Cyanika, Rwanda.

With just 24 hours to engage supporters, the organization focused its communication strategy primarily on digital outreach and social media.

The campaign’s opening email was sent in the morning, with a clear reason for the campaign, distinct call-to-action, and a design that pulled all the messaging together for supporters. Another email was sent later that evening, updating supporters on the campaign’s progress and motivating them to take action. The email even included a progress bar to visually demonstrate how many latrines were funded (and needed) at that hour. A big part of keeping up the campaign’s momentum and visibility throughout the day was the organization’s social media presence. Blood:Water marketing coordinator Laura Blucker says, “Our main focus was social media. We worked our own network of friends and family to have them help us get the message out. We also targeted tweets to big bathroom companies, such as Charmin. Lastly, we aired humorous ads on WAY-FM.”

To spread the word even further, they encouraged supporters to share campaign posts on Facebook, Tweet bathroom puns, and share pictures of their own thrones (excluding selfies, thankfully). By the end of the day, “The Real Game of Thrones” raised enough funds to build 20 of the 21 latrines!

Keep it social— During a 24-hour donation campaign, every minute counts. So what’s the most important thing to do to keep people engaged throughout the day?

Humor can go a long way—Although your organization may be doing some serious work, adding humor to your campaigns can humanize your brand and make your marketing much more accessible. Whether humor is splashed throughout your social media posts, a creative email campaign, or the theme of a full-on fundraising campaign, a bit of lightheartedness can go a long way in delighting your supporters and keeping them committed to your cause. Barbells for Boobs is dedicated to raising funds and awareness for the early detection of breast cancer, with an emphasis on women and men under the age of forty. Inspired by athletes, their mission unites local CrossFit communities together to fundraise and join the fight against cancer.

This year, their fourth annual Pink Bra Tour —a creative fundraising idea that extends beyond the simple, local fundraiser—will take the organization on a powerful journey across the country to interface with communities of supporters.

Campaigning Throughout the Year

Although the official tour starts in September, fundraising and preparation have been full-speed ahead since the beginning of the year.

Because the tour stops at the organization’s top ten fundraising CrossFit locations, fundraisers are excited and engaged throughout the entire year to make the coveted list.

Mission Team Director Robyn Bennett told us, “Every year since [the first tour], we’ve seen enormous growth in people wanting to get involved. Gyms from all over the country (and beyond) fight to be a top ten fundraiser because they know that they’ll be on the Pink Bra Tour the following year.”

And fundraisers’ excitement and commitment are undeniable when it comes to the results. Last year’s top fundraising initiatives (which are now this year’s PBT stops based on their incredible fundraising efforts) raised anywhere from $17,000 to nearly $42,000!

Take It to the Media

The campaign’s communication strategy is a two-fold process. After determining which CrossFit affiliates and respective cities will be on the tour, Barbells for Boobs creates a regional media strategy that involves local publications, radio, and television. The organization’s grantees and local CrossFit affiliates are crucial to getting the word out about the tour and engaging new groups of supporters.

Then, the organization crafted a narrative for national media to generate buzz around the tour. “This narrative includes a heavy push on social media, which includes local participation in addition to the almost 50,000 Facebook subscribers (and other social media outlets) that are friends of Barbells for Boobs and help us broadcast our message,” says Bennett. With such extensive promotional efforts, the annual campaign is able to build anticipation and excitement leading all the way up to the campaign launch. Use peer-to-peer to maximize fundraising results— Rather than a one-time registration fee, boost your results by asking supporters to fundraise a certain amount to attend an event. This combined registration and fundraising approach can engage your supporters on a higher level and help you increase donations exponentially. Limiting the number of participants eligible for a special event can also stir some friendly competition that will motivate your fundraisers!

Leverage media outlets to generate buzz— Media sponsorships can help save costs on advertising, and nonprofit events and campaigns can be excellent ways to raise your organization’s profile. Consider reaching out to media outlets, like local radio stations or newspapers, to do a profile on your campaign or special events, attract media attention, and reach more people. 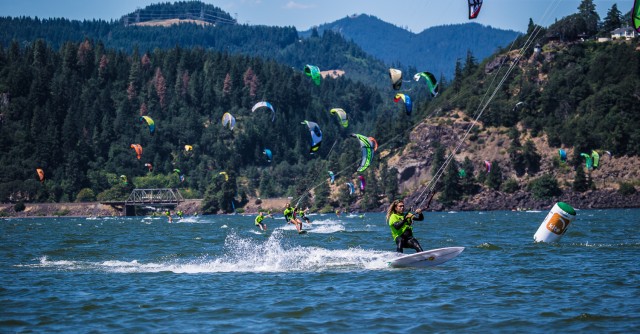 To raise funds for the organization’s survivorship-based program, the 3-day event included silent and live auctions; interviews with supporters, survivors, and sponsors; kite relay races; and the famous kiteboarding derby that challenged athletes to race a 3-mile course for 6 hours. Every year, a main source of the event’s funds comes from participants who fundraise for entry leading up to the weekend.

This year, with the help of UpRaise Consulting—a consulting firm that helps nonprofits meet at the intersection of technology and human behavior to take on the challenges of raising awareness and money in the digital world—the campaign’s fundraising strategy focused on maximizing fundraisers’ individual success.

Matt Scott, cofounder of UpRaise Consulting, says that an important part of their strategy was to launch a timed email campaign and send highly targeted emails to all fundraisers. To keep the messages personal and relevant, they segmented a few large groups and customized the emails accordingly. Social Media Made Simple (and Effective)

This year, the organization worked hard to really tailor the social media experience around the event. One person was designated to handle social media throughout the day, so as to streamline posting and provide a consistent voice to the event. Facebook posts and Tweets were published at each stage of the event, taking care to add professional photos to boost engagement and reach. At the end of the event, they curated a collection of compelling photos for people to share.

The live feed and photo sharing boosted the event’s social media presence. According to Facebook analytics for the event page, Kiteboarding4Cancer 2014 experienced triple digit growth in total social reach over 2013.

Empower and motivate your fundraisers— Because a peer-to-peer campaign leverages your network’s network, your fundraisers are the ones asking for donations, so you want them to be as motivated and equipped as possible. But because fundraisers will perform differently, you need to target your communications based on their needs and motivate them accordingly.

Ramp up your social presence with quality content— While visual content engages supporters on social networks, nonprofit marketers need to remember that quality content increases your chances of being shared. Pauline Lewis, also a cofounder of UpRaise Consulting, says, “There is always a pressure to share photos as things are happening, especially at an event. But sometimes, it is worth waiting for the professional shots as those photos tend to be more vibrant and capture the essence of the moment in a way that makes it more compelling to share.”

Whether you’re planning a 24-hour campaign, annual fundraising campaign (or tour!), or a special event, we hope these unique fundraisers have given you ideas on how to market and fundraise for your next initiative. With some strategic planning and creative spark, you can launch a fun campaign that will engage supporters and achieve success. For more inspiration, check out our other fundraising ideas. How to Get Started With Twitch Charity Streams