Choosing the Right Donation Levels for Your Online Donation Form

The ability to select from a prepopulated list of suggested giving levels is a fairly universal feature of online donation forms. What’s far less standard, however, are the actual donation amounts that nonprofits choose to highlight. Some nonprofits suggest modest donation levels while others shoot for the sky.

So what’s the best approach?

Well, as with most things in life, the answer is “it depends.”

More specifically, it depends upon the nature of your organization, the giving behavior of your typical donor, and the context in which you are asking for the gift. Although that obviously leaves a lot of room for different approaches, there are still some general principles that can help guide your thinking as you go about choosing the default giving levels for your online donation form (or forms).

When it comes to choosing giving levels for your main website donation form, it’s all about figuring out what your average giver contributes and then trying to push that average gift higher. This whole exercise really boils down into two separate activities (1) determining your average online gift size and/or benchmarking against average industry figures, and (2) testing out different giving levels on your donation form to try and push your average donation size up.

We think it’s wise to check your organization’s actual average online gift size AND to benchmark against industry figures. This gives you a sense of relativity before you start messing around with your donation form. You should take a look at a few different industry benchmarks though, as the numbers can vary slightly depending on the source.

Here’s a chart of average online donation size from Blackbaud via npengage and another one from Convio (on p.20). It generally seems to be the case that donations made through website donation forms tend to average out at around $125, but you should check for yourself because this varies depending on what segment your nonprofit belongs to.

Once you’ve had a chance to do some benchmarking you should pull your own online giving data. Try getting information for a year’s worth of online gifts from your main website donation form (but exclude December gifts, more about this later). Then determine your actual average online gift size by dividing the sum of all gifts by the number of gifts made. At this point you should have two different numbers– your industry benchmark (you can take an average of the different benchmark sources to come up with a single number) and your actual average online gift size.

Now take a look at your numbers. If your average online donation is beating the benchmark, then congratulations you’re doing well! If not, then it may be time to tinker a bit with your giving levels. Check your donation form. Did you set the default giving levels too low? Are they far higher than the industry benchmark suggests is reasonable? Try recalibrating the donation levels like this…

In other words, if your benchmark was $125, but you were only pulling in an average gift of $100 you might adjust your giving levels to look like this:

You can even try prepopulating a suggested giving level like this:

It’s important to recognize that some sources reporting online giving statistics conflate gifts through website donation forms with gifts coming through other sources (like peer-to-peer fundraising pages). Watch out for this. The average gift made through a p2p fundraising page tends to hover around $70 and if these gifts are included in a general computation of average “online gift size” it will bring the overall number down. That’s why it’s important only to count gifts through your website donation form when you are calculating your average online gift size to help make adjustments to your website form.

Our platform data shows that the average gift in a peer-to-peer campaign is about $77. And it makes a certain amount of sense that this number would be lower than the average gift made through a standalone website donation form. P2P campaigns are excellent for acquiring new donors because you are able to leverage existing supporters’ social contacts. However, since many of these donors are new to your organization and they are participating in a joint effort, they tend to come it at a lower level. The people who are most likely to visit your website donation form directly, on the other hand, are your existing supporters. These are the people you’d expect to be giving more on average.

In any event, it’s important to keep this point in mind, because if you are going to play around with the donation levels on your check out forms for peer-to-peer campaigns you want to stay in the ballpark of the average p2p gift. If you were looking to improve on the $77 average gift size, for instance, you might set your checkout page up like this:

We’ve mentioned before that it’s often a good idea to spin out a separate donation form for your monthly givers. With the right donation software, you can create a monthly donation form that looks identical to your main website form, but cuts down on the number of steps the donor has to take by defaulting the selection to monthly giving. Another benefit of using this approach is that you can adjust the giving levels on the separate form specifically to improve your average monthly gift size.

According to the 2013 eBenchmark study, the average online monthly donation was about $20. This number swung up to a high average of $33 per month for those giving to international nonprofits, but it stayed very consistent around $20 for other categories. This $20 figure also aligns with our general experience and platform data. So take that number as your benchmark and, just like you did before, compute your actual average monthly donation size (using a year’s worth of monthly donation data, minus December).

In the example above, we have deemphasized the actual average of $20 and suggested instead that $25 is the “normal” monthly contribution. You might also play with social cues in the text of your appeal to try and move the numbers up. Some research has shown that when we are aware that someone else has given a larger contribution than we initially intended to give, we become more likely to increase our gift amount.[1] Of course there’s no elegant way of saying “the person before you gave more” so you have to be a little creative with the text you test out on your appeal page. Here’s one possible way of leveraging social cues to try and improve your average monthly gift size: So we’ve mentioned a couple of times that you should exclude December data when calculating your average online gift size figures, and those weren’t arbitrary comments. If you take a look again at the post from npengage, you can see in the second table that average gift size essentially doubles in all categories during the month of December. Because December is such an outlier month, you don’t want to skew your average gift size figures for the rest of the year by including them in your calculations.

Aside from highlighting this data integrity point, the December figures also shed light on an opportunity for nonprofits. You should seriously consider adjusting the giving levels on your website form specifically for this month. For instance, if your average non-December donation is $100, you might have a form layout that looks like this to try and boost your average gift size:

But if you know that you’re average gift size shoots up to $200 in December, you may shift your layout during this critical one-month period: 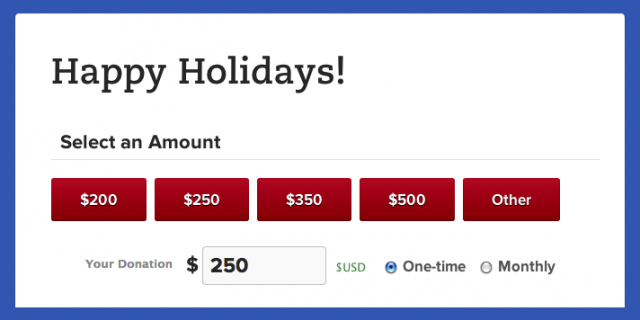 It’s also helpful to be able to whip up custom donation forms in a couple minutes for your special appeals. Not only does this capability allow you to match the look and feel of the donation form to the aesthetic of the appeal you are sending, it also lets you try to upgrade donors in a more efficient fashion.

Read Next: Only One Donation Form? You Might Be Missing Out By taking the time to do some segmenting and spinning out a few different donation pages, you can be more strategic about how you approach upgrade opportunities. Donors with relatively modest prior giving histories will see donation levels tailored to them, while those with larger prior gifts will see correspondingly larger default giving levels. This helps you upgrade more donors from your email appeals and keeps you from inadvertently downgrading larger donors!

Build a Sustainable Stream of Revenue