Here’s a creative fundraising idea for your nonprofit: video gaming for good. You wouldn’t immediately associate couch-potatoing with fundraising, but Desert Bus for Hope raised over half a million dollars during their last fundraising event in November 2013. The money goes to Child’s Play, a nonprofit organization that provides toys and games to children in hospitals nationwide.

A creative fundraising idea is born: the Desert Bus journey

Back in the 90s, the games were good and the graphics were even better. Then, Desert Bus came along and really changed gaming forever. In this riveting game, the player drives a bus at 45 miles per hour from Tuscon, Arizona to Las Vegas, Nevada. The trip takes 8 hours and at the end of it, you turn the bus around and drive it back, making it perfect for a marathon challenge of impossibly boring gaming. 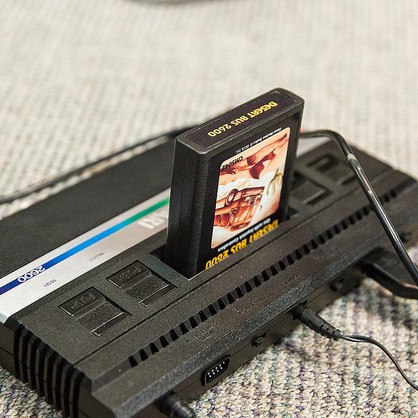 When an improv comedy troup called LoadingReadyRun rediscovered the game in 2007, they decided to use the game’s unique hilarity to raise money for charity. And so, Desert Bus for Hope was born. Every year the group gets together to play Desert Bus and the rules are simple: never stop driving.

“We play it for as long as donations come in. In order to keep things interesting for our viewers we have live and silent auctions, giveaways and contests, celebrity guests and a lot of silliness.”

What started as a small group of friends rallying for a good cause has turned into an operation that requires a sizeable staff and volunteers, coordination and planning. Their efforts and dedication have paid off though. They’ve gone from raising $22,000 in 2007 to $523,520 in 2013, adding up to 1.2 million dollars over a 6 year period!

Watch this short informational video from the Desert Bus for Hope crew to preview the game and get a breakdown of the event planning:

How did Desert Bus gain so much traction?

Part of Desert Bus for Hope’s appeal is its novelty. Naturally, people want to understand what “video gaming for good” means and what this nonstop “Desert Bus” drive is all about. The challenge is like fear factor for gamers.

The group has done a great job of including other activities around the virtual driving marathon. In addition to auctions and contests, LoadingReadyRun has developed an incredible inclusiveness to their fundraising event. They livestream continuously throughout gameplay and invite donors to actively participate in all the fun by allowing them to phone in, submit challenges and request various forms of entertainment.

“Desert Bus is a great example of what happens when a huge community of people from all over the world – organizers, volunteers, crafters and viewers – come together to achieve a common goal.” It certainly doesn’t have to be and, with a bit of effective execution and foresight, growing your creative fundraising event might not be such a chore. And, like Desert Bus for Hope has done so well, it can be incredibly fun!

An important piece of growing a “branded event” like Desert Bus for Hope is keeping the cause aligned with the actual event activity. In Desert Bus for Hope’s case, there is a strong and distinct connection between playing a game and donating games to children who are ill. While black tie galas can be extremely valuable and rewarding, there is definitely something to be said about maintaining a relationship between the event and cause that keeps people coming back.

By the way, Desert Bus isn’t the only way to raise money for charity through gaming, last week a group of gamers helped raise $1 million for the Prevent Cancer Foundation. Get creative!

Run Your Best Campaign Ever