7 New and Noteworthy Nonprofit Organizations to Watch in 2016

Nonprofit organizations continue to surprise us with their ingenuity and innovative solutions to social problems. Classy is always excited to learn about emerging social impact organizations and we love to share their stories. Check out these seven nonprofits who really hit their stride in 2015. Can grilled cheese sandwiches give a brighter future to formerly incarcerated youths?

Founded and based in New York City, this organization seeks to change the dismal prospects that many young people with criminal histories face. In New York, 16 year olds are automatically considered adults by the criminal justice system and 70 percent of young people treated as adults reoffend. High recidivism is caused in part by the lack of education and opportunity available to young offenders. The founders of this organization use the growing food truck industry to train and inspire young people to succeed after facing the court system.

Drive Change provides six- to eight-month fellowships for formerly incarcerated youths with the goal of moving on to a new education or employment opportunity. Fellows prepare and serve the food truck’s gourmet grilled cheese and other dishes, but they also learn and work in marketing, customer service, and money management. Real world experience and opportunity changes the game for New York’s youth.

Ninety percent of sexual assaults are committed by someone the victim knows and the widespread ignorance of sexual consent is a big part of the problem. Founded by students at Penn State University, Only With Consent creates and distributes consent education materials to colleges and conferences. Because their mission is to educate people of all ages and backgrounds about consent, they are also developing age-appropriate curriculums to be used in schools nationwide.

Beyond informing the public about consent, Only With Consent partners with and refers people to other nonprofits supporting survivors and starting a dialogue about sexual violence. Many people don’t know when it’s appropriate to use a semicolon, but to this growing nonprofit organization, it fits into any story. The semicolon is used when the writer could end a sentence, but instead chooses to continue. The symbol is at the center of Project Semicolon, which seeks to promote hope and love to people struggling with mental illness and self-harm. By sharing stories and supporting each other, participants help each other keep going.

In 2013, Project Semicolon’s founder Amy Bleuel got a tattoo of a semicolon in memory of her father, who committed suicide. The symbol and hashtag #projectsemicolon gained widespread popularity on Instagram. People send pictures of their semicolon tattoos, often accompanied by a message of hope and perseverance to the organization’s account.

Duchess Ride believes snowboarding, skateboarding, and surfing can teach girls to dream big and achieve. Started when some friends discussed female role models on a chair lift, this new nonprofit’s mission is “to cultivate tenacity in young women through participation and progression in board sports.”

Their inaugural programs are slated for early 2016, when girls ages 10 to 12 of all skill levels will gather for six weeks of mentorship and snowboarding lessons. Skateboarding and surfing programs are scheduled for summer 2016. To publicize and fundraise for the cause, founders Carly Finke, Claire Altenau, Jaime Schulte, and Carissa Bisnar are skateboarding 300 miles down the California coast in the first annual Duchess Ride’s FURTHER fundraiser.

Facing the world without parents is a huge a challenge and poverty, hunger, and lack of education make it even harder for orphaned children to succeed. That’s why Weight of Glory Orphan Care sponsors and supports the children living at L’esperance Children’s Aid, an orphanage in Uganda.

After L’esperance lost much of its financial support in 2014, some former volunteers in the United States began fundraising for the orphanage. In its first year, Weight of Glory has rebuilt a kindergarten classroom, created a sustainable poultry farm, and sponsored 25 children at L’esperance. The young nonprofit is working with L’esperance to make the orphanage 100 percent sustainable.

The social impact sector has a long history of combining athletics and charity. From 5K run/walks to charity sports tournaments, people love to work up a sweat while working for a cause. Kettlebells4Kids is channeling the popularity of CrossFit to help homeless children in America. For those who haven’t heard of it, CrossFit is a fitness company that trains people with intense workouts combining interval training, weightlifting, plyometrics, and other exercises. A kettlebell is a weighted piece of equipment common among CrossFit enthusiasts.

Like Classy client Barbells for Boobs, Kettlebells4Kids mobilizes CrossFit gyms (called “boxes”) and athletes to create peer-to-peer fundraising pages and collect donations. The fundraising dollars go to partner organizations Bright Horizons Foundation for Children and Horizons for Homeless Children. Since they fight a nationwide problem (there are 2.5 million homeless children in the United States), Kettlebells4Kids makes sure that funds raised stay in their state of origin. CrossFit athletes can help kids in their own backyard. 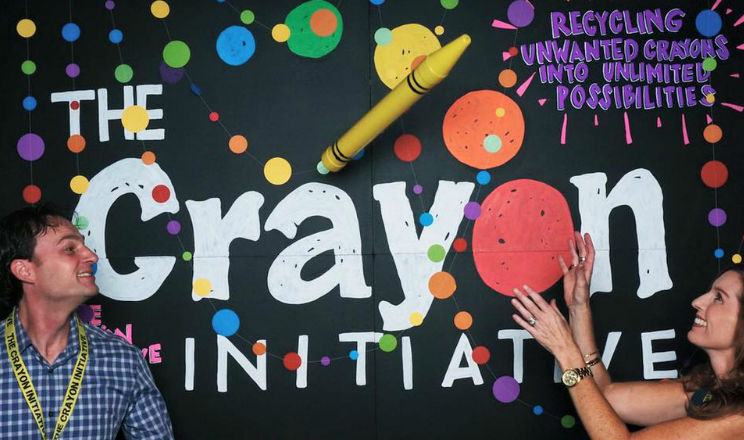 To a child, a box of crayons can open up a whole world. And when children face illness, the chance for creative play is even more precious. Unfortunately, tens of thousands of crayons go to waste, ending up in American landfills. The Crayon Initiative collects, remanufactures and distributes unwanted crayons to hospital arts programs.

The idea first came to founder Bryan Ware when he realized the complimentary crayons his children received in restaurants were usually thrown away after just one use. Since then, The Crayon Initiative has been collecting unwanted and broken crayons from restaurants and schools to repurpose and put them to use. Ware and other volunteers melt the crayons and remold them into larger, triangular crayons that are easier for children with special needs. The crayons are then boxed and brought to kids who need them.

We want to hear about other new nonprofit organizations. Share your favorite startups for social impact in the comments!

Run Your Best Campaign Ever