If only fundraising were as easy as 1+1=2. There might not be a set formula for fundraising success, but there are definitely certain campaign elements common to killer peer-to-peer campaigns. And with the average individual fundraiser bringing in $568 from 7 donors, it’s apparent that taking the necessary measures to set up your peer-to-peer fundraising campaign for success is well worth it.*

So, how can you knock your peer-to-peer fundraising campaign out of the park? Keep these 10 things on your campaign checklist and you’ll be off to a fabulous start.

It’s critical that you always, always set a fundraising goal for your peer-to-peer campaign. Make sure your campaign goals are specific and concrete.

Your campaign goal should answer the following questions:

What exactly are you trying to fund? Are you funding a concrete, programmatic service (e.g. 50,000 meals), or a sum to be dispersed more broadly (e.g. funding your operations for the next year)?

Calculate how much funding you’ll need to get that new program running or keep up your overall operations for another year. This is your initial campaign goal.

Afterwards, count up your core supporters, email list and social media following. Estimate how many will actually fundraise for your campaign, and then figure out much each would have to raise to hit your initial campaign goal. Is this achievable? The point is to check whether your campaign goal is realistic.

Tip: But really, make sure your campaign goal is achievable. You want to set your supporters up for success; fundraisers will be motivated to boost their efforts, and donors will be likelier to give, when they feel like they can actually succeed and help your campaign cross the finish line.

Every fundraising campaign needs content that will compel supporters to get involved – from assets as simple as plain text email to as complex as a campaign video. It’s a good idea to prepare all your assets beforehand so you can plan when and how to use each piece throughout the campaign.

• Opening email series that introduces your campaign and recruits fundraisers

• Videos and photos of your fieldwork

• Testimonials from your constituents, volunteers, staff, or board members

• Infographics about your cause or sector

• Any GIFs or visuals to include your email campaign

What does this prove? Educating and equipping your fundraisers can directly affect your campaign’s results. Because a peer-to-peer campaign leverages your network’s networks, your fundraisers are the ones soliciting their friends and family for donations. This means you need to give them the tools they need to be successful.

To coach and equip your fundraisers, you can:

In another example, Barbells for Boobs offers an extensive supply of downloadable assets and resources for their fundraisers on their website. 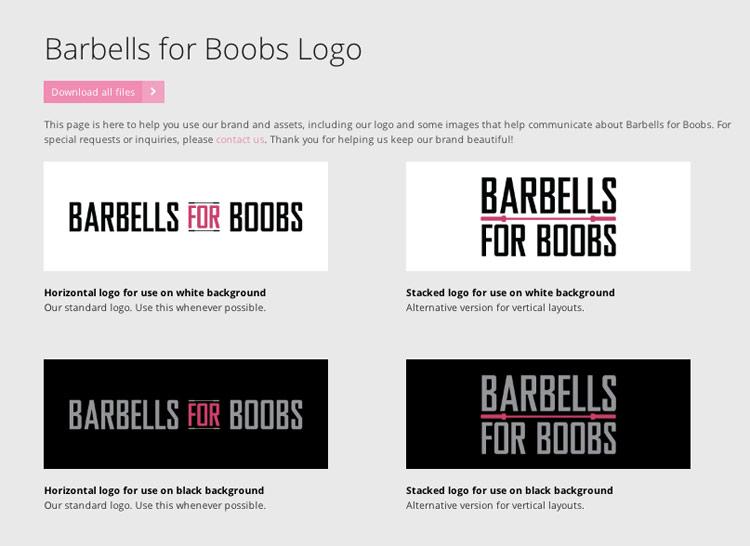 Incentives are a great way to excite your supporters and motivate them to get involved in your initiative. They can also help reenergize fundraisers and donors when you hit that common mid-campaign lull.

In addition to offering swag or gear, another great way to refresh supporters’ excitement midway is to announce a donation match campaign. The opportunity to double their impact can revive supporters’ enthusiasm and pull new donors into your campaign. Reach out to corporate sponsors or large donors to see if anyone would be willing to sponsor a donation match.

If a match campaign isn’t possible, another way to incentivize participation is to show supporters some public recognition. Whether you recognize top fundraisers on a leadership board on your website, or tag and thank donors on social media, figure out ways to shine the spotlight on your supporters.

After planning and collecting all of your campaign assets, you might be tempted to jump straight into a full-blown campaign launch. While this seems like the next logical step, doing so can actually cause your campaign to stall out quicker than expected. And no one wants that.

To increase your campaign’s overall chances of success, you need to properly roll it out by splitting your launch into two phases: a “soft launch” and a hard launch. Your soft launch is like a “campaign within your campaign”: this is the week-long period when you recruit core supporters into the campaign before promoting it to a wider audience.

People are likelier to join something that they think will be successful, so by having people jumpstart your fundraising, you can build initial momentum that creates a frame of success and motivates others to join your “winning story.” Reach out to your most dedicated donors, fundraisers, social media evangelists, and passionate volunteers, and invite them into your “inner circle” of supporters committed to helping your campaign reach success.

After your soft launch, your campaign’s reach and exposure depends on the extent of your widespread promotional efforts. Successful fundraising campaigns tap into every marketing channel to get the word out to supporters.

Opening Email Series – After comparing a 2-3 part email series and a one-off email, one M+R study found that the email series generated nearly four times the response rate and twice the average donation size. Create an email series that introduces the campaign, its basic marketing message, and its goal. Each email should include a call-to-action to create a fundraising page.

Website – To direct attention toward your campaign, you should place a banner promoting it right onto your website homepage. Action for Hunger, for instance, prominently features their holiday gift guide campaign front and center on their website; you can adopt this approach to promote your own peer-to-peer fundraising campaign. 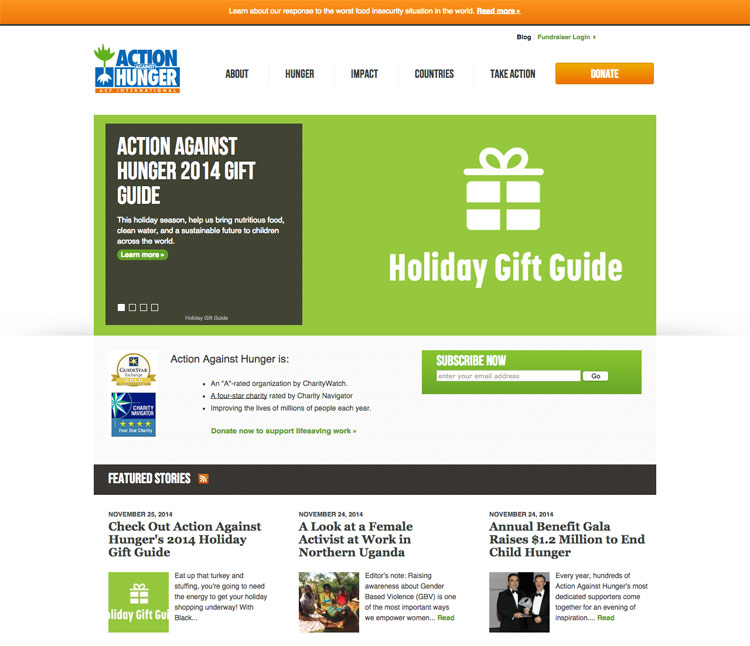 We also just launched our free Social Media Guide that covers how you can engage donors on each social channel, so check that out for more fun and creative campaign ideas.

Tip: You don’t want to make all your social posts an ask to donate or start fundraising – this will just annoy your followers. Instead, your posts should include links directing people back to your website to learn more about your campaign.

Tailor your communications to effectively engage different members of your audience.

Use email segmentation to deliver more targeted messages and increase support during your campaign. Your segments might look something like this:

• Inactive Fundraisers – those who have raised $0

Check in with these supporters and send any fundraising tips or resources to help them get the ball rolling.

• Active Fundraisers – those who have raised at least $1

Keep them engaged and motivated by sending them inspirational impact stories, incentive announcements, and campaign updates. You can even encourage their progress by reminding them how much they’ve raised so far, like LiNK does here:

• Power Fundraisers – those who are raising big bucks)

Send personalized messages focused purely on saying thank-you for their commitment. Invite those who are doing especially well to help recruit other fundraisers or extend your campaign’s overall reach.

8. The Branded Donation and Fundraising Pages

This should convince you to create custom donation forms branded specifically for your campaign. Carry over any imagery and copy used in your email appeals onto your donation form; this consistency in branding and messaging sustains your donor’s emotional momentum to give, and it also reassures donors their contribution is going to the campaign they intend.

Read Next: Why You Might Be Missing Out if You Only Have One Donation Form

The last stretch of your campaign is just as important as its first.

Ensure a strong finish by creating a 2-part closing email series to ramp up urgency. At the start of the last week, send an email reminding fundraisers there’s only one week left to bring it all home. Reach out individually to your power fundraisers and ask them to help you cross the finish line strong. Then, a few days before your campaign ends, send a final email thanking and celebrating fundraisers for all that you’ve achieved together.

Following up is a cornerstone of any successful fundraising campaign. Your supporters just helped you achieve success, and now it’s time to touch base with them again.
Make sure to:

• Thank them – When it comes to follow-up, surveys have shown that donors prefer to receive personalized letters. At the very least, you should send thank-you emails, which can be easily segmented to send a more tailored message.

• Share campaign results – How much did your campaign raise? What is its exact impact? How does this affect your mission moving forward? Take this great example from Pencils of Promise. 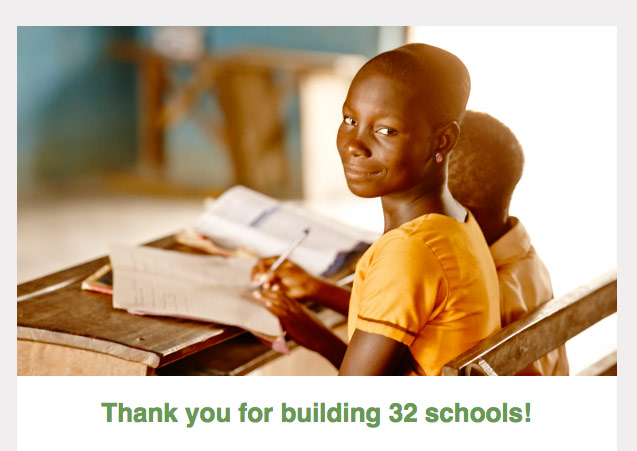 • Ask for feedback – Close the feedback loop by asking fundraisers and volunteers about their experience. Find out what they enjoyed and what they didn’t. This gives you more direction when planning future peer-to-peer fundraising campaigns.

Before you start planning your next peer-to-peer fundraising campaign, review this list and make sure you’re thinking about every piece before you launch. Every one of these elements plays a direct hand in your success, so check each off every one as you plan and prep for your next campaign!

Read Next: How to Organize and Manage Resilient and Successful Fundraising Teams

The 4 Phases of an Effective Peer-to-Peer Campaign

5 Fundraising Trends to Watch in 2023

How to Engage Donors Creatively After the Giving Season